Avlitis is an early Cycladic artifact found in 1875 in a tomb in the Desert Islands of Keros. The marble statue is the figure a piper standing upright playing a diaulos (double-aulos). He rests his lips of the channel, which he holds with both hands. The face is looking up in the sky. The nose is the only distinct feature of the face. Both feet step on the ground. The diaulos is broken and the pieces are missing. On the whole, it is in very good condition. It stands as a unique example of artifacts of the Early Cycladic sculpture technique. The piper and the harpist are the most ancient examples of sculpture that are three-dimensional. It was made between 2800 – 2300 B.C. A characteristic feature of the statue is that the figure is naked. 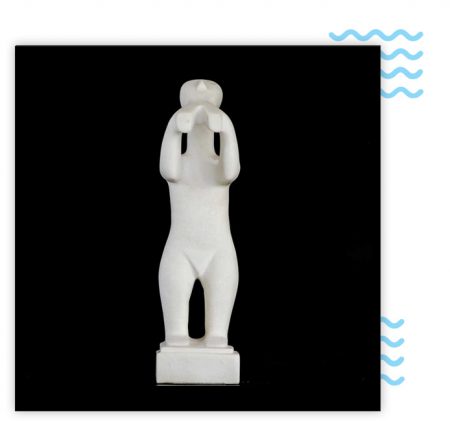